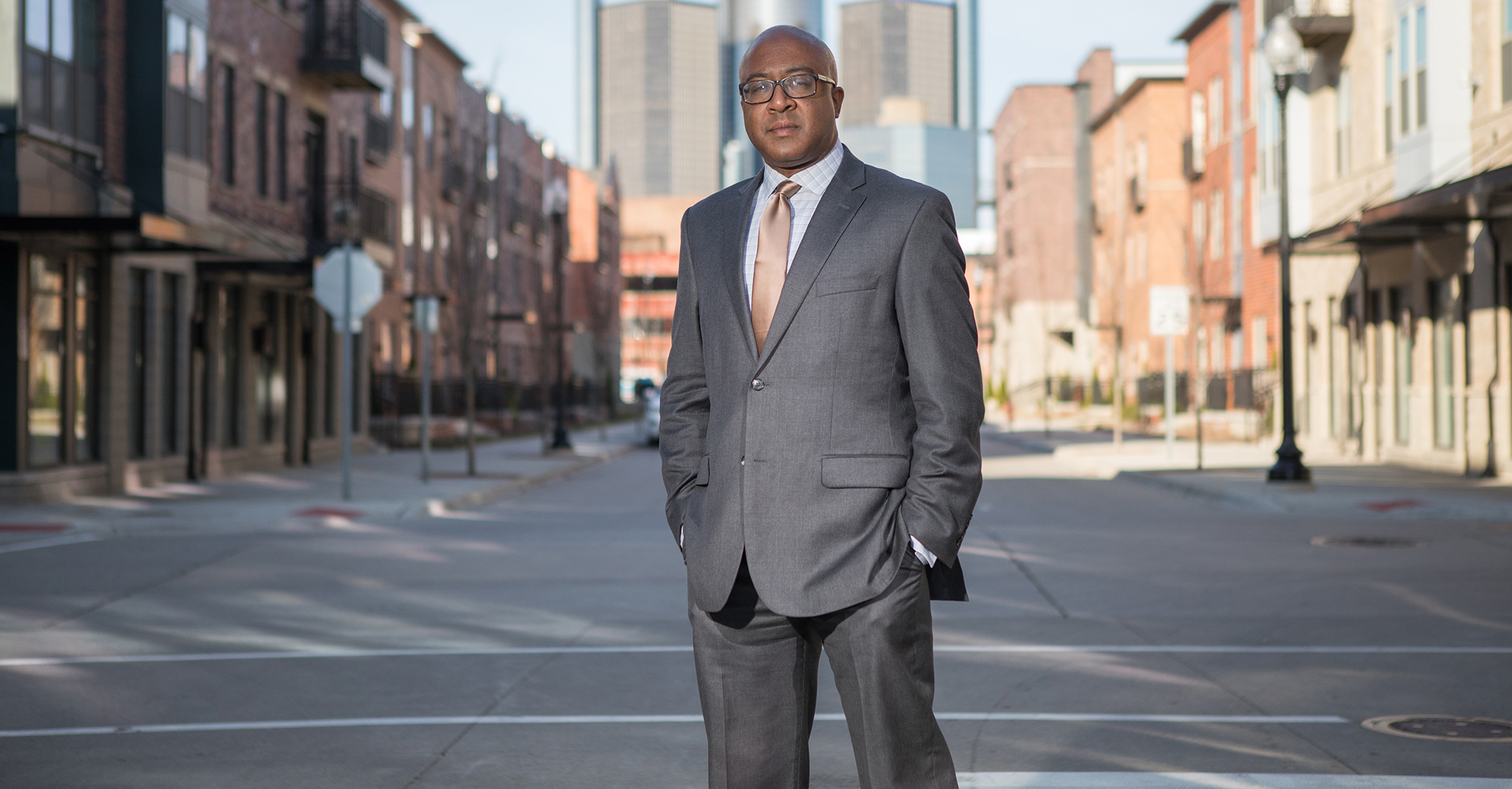 Now, having returned to Michigan, his home state, the accomplished performer, composer, arranger and producer is Associate Professor of Jazz Piano at Michigan State University. After being awarded a Humanities and Arts Research Program (HARP) grant, which provides funding to faculty for research leading to creative and performance projects in the arts and humanities, Davis embarked on his concept for “Rise Up Detroit,” his first recording on the Detroit Music Factory label.

“When I think of a lot of my favorite recordings, John Coltrane’s ‘A Love Supreme,’ Miles Davis’s ‘A Kind of Blue,’ they had concepts to them that tied the whole record together,” says Davis. “My previous recordings, I would go into the studio first and then later think through it to discover what tied the music together. With this record, I went in already understanding what the connections were.”

The shift if in process, according to Davis, was impactful. “Rise Up Detroit” stands apart from his previous works.

“Rise Up Detroit” is more than just a Detroit-inspired jazz record. Taken individually, any one of the suite’s movements can stand alone as an outstanding piece of music; it has all the elements: beautiful composition, skillful arrangement, excellent musicianship … But Davis’s approach to “Rise Up Detroit” is much more deliberate, much more intentional. It’s wholistic. It’s storytelling.

Each of the movements in “Rise Up Detroit” represents a particular historical aspect of the African American experience in a city with a rich and storied past. From its crucial significance to the Underground Railroad, to the influence of the Southern migration into Henry Ford’s factories, and its later experience of exodus and healing, Davis’s suite captures the energy of a culture whose influence spans generations and the globe.

With musicians such as Regina Carter on violin and Rodney Whitaker on bass, both of whom have the spirit of Detroit (perhaps even the Spirit of Detroit) intrinsically woven into their playing, the musicianship on this record is multi-layered, multi-faceted, but definably Detroit.

Carter, who leads the album’s string quartet, brings an energy and feel that translates right through the rest of the string section. And while technically Whitaker may be Davis’s boss (Whitaker is the Director of Jazz Studies at Michigan State), it’s his “undeniably distinctive bear-sized bass tones” that dictated he was the obvious choice for “Rise Up Detroit.”

“I’ve been a fan of Rodney since I was in college,” says Davis. “He’s just a few years older than me, but I just have so much respect for him musically and personally.”

Davis also credits Carter and Whitaker as inspirations for the album, with all of their insight and knowledge of the city and its history.

“Rodney is a walking encyclopedia about Detroit history,” says Davis. “That was invaluable.”

Not surprisingly, there’s a special chemistry between Davis and the album’s drummer, Quincy Davis. The two are brothers, and although they now live in separate states, they played together with jazz trumpeter Tom Harrell when the brothers were both in New York.

“He hears things similar to me,” says Davis. “That makes it really easy to play with him.”

As Davis takes us through the aural history of African Americans in Detroit, he’s careful not to simply replicate the music of the eras he’s exploring. He comes at the music with an originality that isn’t tethered to the sound of a particular period. Take “Black Paradise,” for example, which captures the spirit of two of Detroit’s most historically significant African American neighborhoods: Black Bottom and Paradise Valley. It’s a driving, rhythmic toe-tapper with harmonic intensity, but the “storytelling” is not an attempt to emulate. Instead, Davis paints the mood and energy of a thriving community in a much more personal way.

For a jazz record, Davis’s instrumentation is unconventional and emotive. His use of strings brings an expressiveness and color that is particularly evident in the emotion that Carter draws from her violin. The texture from the pizzicato cello on “The Great Migration” and “Oh Henry” brings an energy and sound that just isn't found in the typical trumpet/tenor frontline of most jazz groups.

You can tell Davis loves writing for strings by the way he dives into their versatility and finds different ways to use them throughout “Rise Up Detroit.”

In “Exodus,” Davis opens with the somber, heart-wrenching voice of the cello playing the melody in a kind of dirge, accompanied only by the piano. It slowly grows, layer by layer, to include the full string quartet, plus the trio playing the melody. The energy of “Exodus” becomes dire with the driving groove of Davis’s piano solo, reminiscent of McCoy Tyner or John Coltrane. Possibly the pinnacle of the album, “Exodus” is bittersweet and nearly cinematic.

A very fine mixture of musicianship with melodies and plenty of strings, this project is powerful