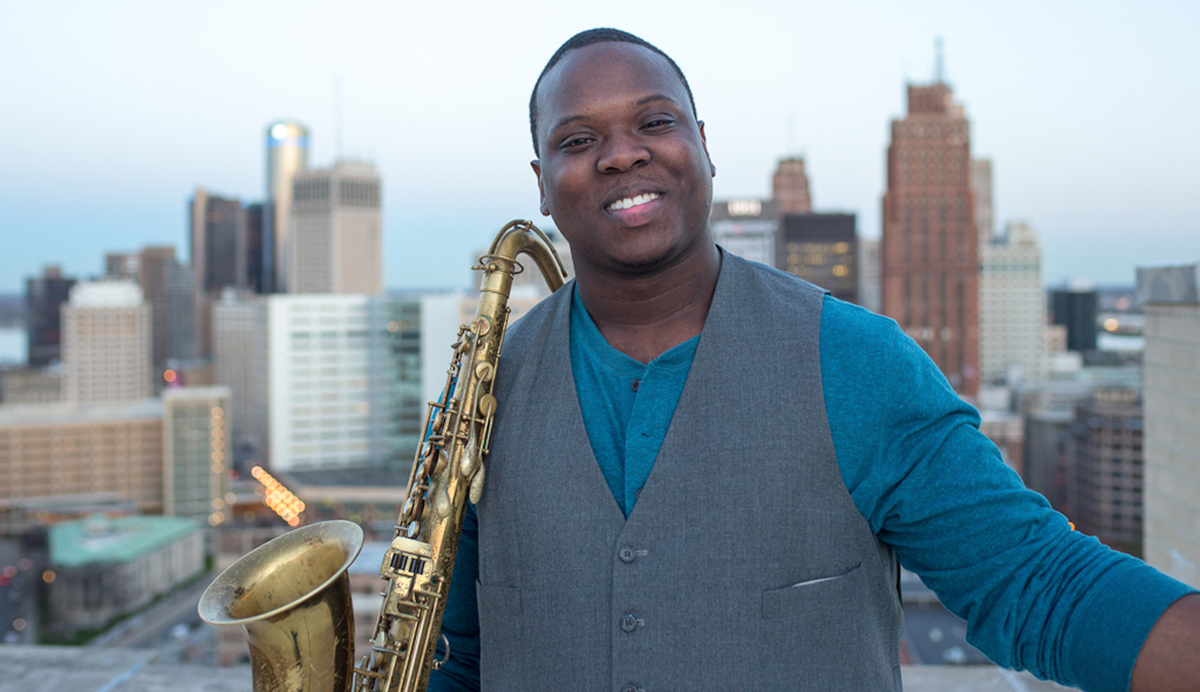 Confidence and talent have taken De’Sean Jones far in the last decade and a half, a long road that started with a casual bet between De’Sean and his father.

Just 12 years old at the time, and having only dabbled in music up to that point, De’Sean heard the music of Charlie Parker and Miles Davis. Intrigued, but not intimidated, his reaction was “I can do that.”
To his surprise, the elder Jones called his bluff by purchasing a saxophone and gave the young man six months to prove himself. The rest is Detroit music history, still in the making.

A prodigy on tenor sax, Jones participated in the Detroit Symphony Orchestra's civic jazz program, attended the Detroit School for the Fine and Performing Arts and the prestigious Oberlin Conservatory. He also studied under renowned jazz bassist Rodney Whitaker both through the DSO and Michigan State University.

His mentors entered his life early, leading him into the folds of Detroit’s weighty jazz scene at the age of 15. As a teenager Jones played with such notables as the late-great Gerald Wilson, Donald Walden and Lawrence Williams. But it was Detroit jazz icon, Marcus Belgrave that left the deepest imprint on his musical soul.

“Marcus is the reason I became a musician,” De’Sean says of the late- great trumpet player. Belgrave became a second father to De’Sean; his musical father. He brought him into the world of jazz that would be his home, his familiar place, into adulthood, even as he ventured out into other areas of musical experimentation. The two even engaged in long, sometimes harsh conversations that were rarely about music, but rather about life.
“He was much more than a force from the bandstand,” says De’Sean. “He was my role model. He helped groom me into a man.”

On his newest project, the release of “Knomadik Reverence” by the De’Sean Jones Septet, De’Sean pays homage to his spiritual beliefs and to those who inspired him as a student, in particular on the cut “Solomon Da Wise,” which he wrote and dedicated to Belgrave and early mentor, Solomon Parham.

The first release for the DeSean Jones Septet on the Detroit Music Factory label, “Knomadik Reverence” is a collection of all original tracks that ambles on the adventurous side of jazz, but not without high energy.

De’Sean’s band mates in the septet include Chase Jackson on Vibraphone, who also wrote two of the album’s tracks. The other musicians are Aaron Janik on trumpet, Conrad Reeves on guitar, Shea Pierre on keyboards/piano, Matt Adomeit on bass and Austin Vaughn on drums.

Just as rich and emotionally charged as “Solomon Da Wise” is the sultry “Greyhound.” “People like ‘Greyhound’ because it tells a story,” says De’Sean.

The piece is a rollercoaster of a composition, moving from high energy to methodic layers.
“I think people appreciate that it takes them on a journey,” he says.

Over the years, De’Sean has evolved to become much more than a jazz musician. His originality and unique sound fuse a multitude of influences including funk, hip hop, bebop and soul. He has been an active member of the legendary Detroit electronic music collective Underground Resistance for several years, and has toured and co- produced alongside techno pioneer Mike Banks and keyboardist Jon Dixon.

Not yet 30 years old, De’Sean Jones is making music beyond his years, and if “Knomadik Reverence” is any indication, his talent and confidence aren’t showing any signs of slowing down. “[A] roarin’ young lion,” according to music writer and jazz aficionado Charles Latimer, who says De’Sean “…can make his tenor swing and sing at the very same time.”

Yep. He can do that.

He was mentored by the late Detroit jazz trumpet legend Marcus Belgrave, and he put in time at Michigan State University with bassist Rodney Whitaker and at the Oberlin Conservatory.

Jones’s debut album Knomadik Reverence on Detroit Music Factory is an example of the fusion a growing number of musicians in Jones’s age demographic are into. Knomadik Reverence is a hybrid of jazz, techno, and elements of rock demand that listeners be open-minded.