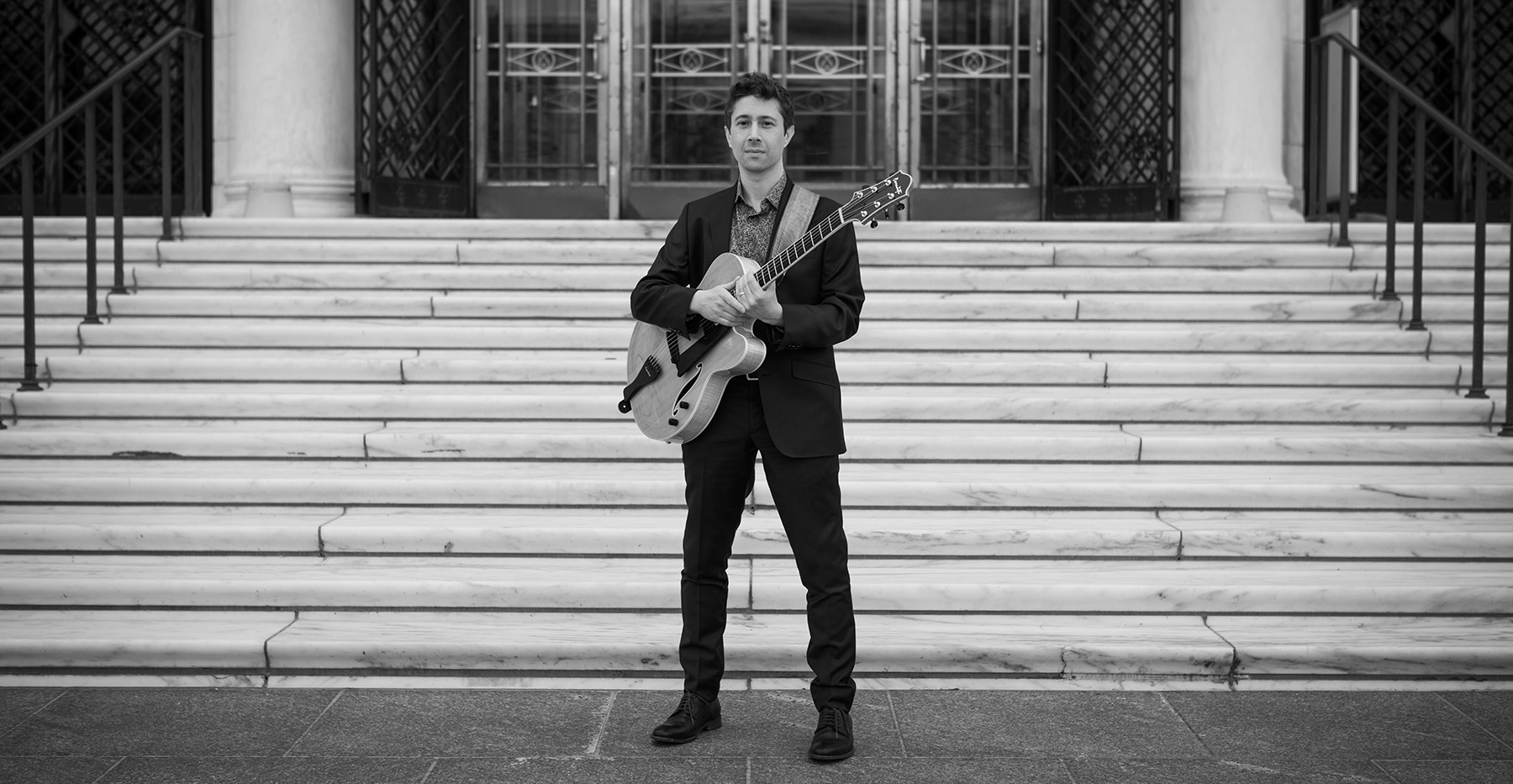 There’s a long tradition in jazz of young musicians disrupting and inspiring the scene, while veteran musicians, the best of whom never lose that youthful energy and excitement, bring the experience that can only come from decades of exploration. It’s a timeless, two-way street that every true jazz artist drives.

“I’ve been thinking more and more about the lessons of my teachers and mentors,” says jazz guitarist Randy Napoleon. He’s played on nearly 80 records and has spent years touring international stages, but in recent years he has expanded his musical role to include becoming a professor in the jazz program at Michigan State University. “I continually carry the influences of my teachers with me, but I’m also finding inspiration in the new, creative voices of musicians 20 years younger than me.”

And this record ties that all together.

Common Tones is Napoleon’s second record on Detroit Music Factory. It explores the balance that comes from the intergenerational musical exchange that is as foundational to jazz as any elements of sound or expression.

The record is thematically thoughtful, and the performances are conversational. Its structure reflects the underlying narrative of the record: how the bricks of excitement, and of a readiness to be limitless, are the earliest, essential components around which experience and focus lay a solid road.

Common Tones features four generations of musicians. The first eight tunes were recorded with the younger artists, each of whom has been quickly establishing their place in the world of jazz in recent years. The next four tracks, which were performed with the veteran players, form and homage to two of Napoleon’s most influential mentors, tenor saxophonist Donald Walden and trumpeter Louis Smith. And the final tune, “Lessons Learned,” brings it all together.

While playing with veteran jazz musicians is familiar territory for Napoleon—among the many international acts he’s played with, he’s toured with mentors Freddy Cole and Benny Green—he’s now at a stage in his career where he’s no longer the “young guy” on stage, and he seems to be settling into this new role quite comfortably, and even with a renewed energy.

“It’s funny for me to be on the bandstand with someone who’s 20 years younger, but they can really push you and challenge you,” he says. “Some of these musicians I knew when they were just learning their ABCs musically, and just a few years later they’re putting on the heat.”

Although Napoleon did all the arrangements on Common Tones, and he wrote all eight of the original songs on the album, he sees the record as a true collaboration. It hits a lot of musical territory, with a variety of feelings and grooves. He moves confidently through moods, from the upbeat and bright swing of “I Married an Angel,” to the aggressive and unpredictable “Saber Rattle,” or the serious and intense “Where It Ends.”

Napoleon opens the record with the familiarity of The Beach Boys’ “Wouldn’t it Be Nice.” Although there are no lyrics on Napoleon’s jazz rendition of the famous pop song, the irony of the opening line on the original is not lost on him. In our heads we hear “Wouldn’t it be nice if we were older,” while the young musicians play Napoleon’s arrangement with maturity and depth.

The performances on the Motown cover “You’ve Got to Hang On” are particularly enjoyable, and certainly a source of pride for a Michigan-based, Detroit-produced record. Just listen to the blues groove in Drew Kilpela’s trombone solo. It’s a great example of how the soul of that music percolates in the DNA of these musicians.

The scaled down arrangement on the original composition “If DW Were Here” is a beautiful ode to Donald Walden. It’s performed as a piano and guitar duo, and features the masterful playing of Napoleon’s fellow Detroit Music Factory recording artist Xavier Davis.

Common Tones brings everything full circle with the last tune on the record, Napoleon’s composition “Lessons Learned.” Michael Dease’s thematically-exquisite trombone solo alone is worth the price of the record. The tune is beautifully melodic and sentimental. Perfectly balanced, it pivots from major to minor, back and forth between melancholy and bliss.

“I love the excitement of playing with the younger musicians, their fearlessness to try anything. It reminds me of my most pure musical self. You just play exactly how you believe. Like, ‘this is how I feel about the music and I’m going to play this way.’ There’s no limitations to the expression,” says Napoleon. “That’s emotionally where I want to stay. And I’ve played with musicians in their eighties who are still like that. That’s how I want to be.”

Now Playing:
Wouldn’t It Be Nice